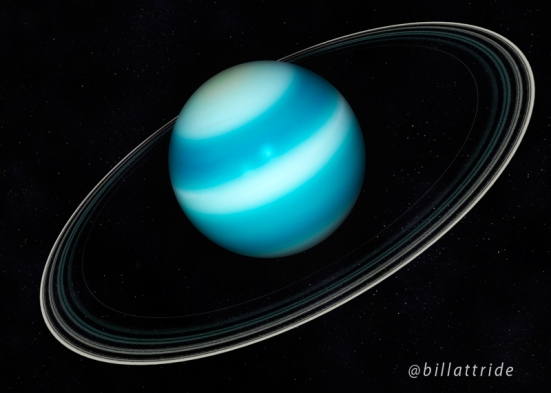 The Astrological calendar for 2019 appears to be somewhat less eventful than recent years, but appearances are often not what they seem. What are the Astrological conditions that will prevail this year?

2019 will be like many other years. We will have three periods of Mercury retrograde, (March 5—March 28, July 7—July 31, and October 31—November 20). There will be three Solar Eclipses (January 5, July 2, and December 26) and two Lunar Eclipses (January 21 and July 16). Of course, there will be New Moons and Full Moons each month, and the yearly passage of the seasons and signs that mark your journey through the stars. But what are the most important elements that will inform your journey this year?

Uranus in Taurus – Transformation of Value

Many planetary factors that were true for 2018 will continue with modifications in 2019. The only significant shift of sign position will be the final move of Uranus into Taurus on March 6th, where it will remain now until July 2025, (it had moved into Taurus on May 15th, but it turned retrograde and re-entered Aries on November 6th, 2018).

The previous times for Uranus in Taurus were 1935–1942, 1851–59 and 1768–75. In each of those periods, the effect of Uranus (The Awakener) moving through the sign of Value (Taurus) witnessed significant shocks and conflicts, leading to cathartic transformations, as differing value systems within and between cultures, broke the bonds of meaningfulness that hold societies together. Without a strong consensus, lacking a significant agreement on commonly accepted values and virtues, the “center cannot hold” because it seemingly (or actually) does not exist.

For example, in the United States the most recent passage in the late 1930’s formed the lead up to the “War of Democracies versus Fascism” or World War II; the 1850’s led up to our defining conflict, “The Civil War” (1860–65), and the 1760’s-70’s witnessed the breakdown between the American colonies and England, leading to our “The Revolutionary War”. The history of those three previous periods should certainly give us reason for concern as to what may lie ahead for us.

It is very apparent that our own period is building to a spiritually necessary and cathartic crisis from differences over, and conflicts between values once again. There comes a point when the divide within a people, or between one people and another, becomes so great that only a fundamental shock to those systems will provide the rebirth needed to set things right again. Uranus ever serves the cause of Individuality and Freedom. The fractures and clashes that Uranus elicits will always serve to steer the human story towards the enduring light of this fundamental Truth:

Until we create a world where all are free to be and be self-fulfilled, then none of us are truly free.

Though it may be painful to experience these shocks that Uranus delivers, it brings about the necessary next step we must take to create a world of freer minds and lives.

Saturn in Capricorn – The Test of Responsibility

Saturn continues to move through Capricorn in 2019, and although it will enter Aquarius on March 20, 2020, it will retrograde back into Capricorn on July 1, 2020, and then re-enter Aquarius on December 17, 2020. This means that the planet known as “The Teacher”, will continue to challenge every individual, community, and culture as it tests and so reveals the essential character or worthiness of the various hierarchies and institutions that we have formed to meet our needs for one another.

Whether we consider the most fundamental structural unit of the family, then on up through more encompassing communities formed by geography, interest or belief, or corporate structures, or state and national political institutions, it is through and by means of all these hierarchies that we have incorporated our values and formed the enduring legacies of our ways of meeting one another’s needs. This Hierarchy of Institutions form and serve to fulfill the realized (or crystallized/materialized) relationships of each of us to one another. From them we create our titles and roles, and we undertake our responsibilities so that we can claim our rights within the social order that we have made with one another.

But it is precisely this Institutional Order that is being broken down and transformed by the passage of Pluto in Capricorn (from 2008–2024), just as it did in the late 1700’s and in the early 1500’s. Now joined by Saturn in Capricorn, we see this challenge to our Institutional order facing extreme stresses and strain. Each of us, with Saturn moving through Capricorn needs to be asking, “What is my purpose here?” What is the responsible way to act in a world turned upside down? What is our proper role and what is the truth that will guide us as we face this “end of an age”?

Of course, I maintain that the answer must always be that these critical moments require a return to the ever-lasting values that have guided our footsteps from the very beginning. The answer is always the same: we must hold to the Spiritual, Philosophical and Scientific truths that form the foundation of the Human Story.

But, in each crisis of transition throughout history, there have been three necessary, different and yet integral responses and callings depending upon the individual and their community:

There are those who are called to preserve, who will seek to maintain what is good and true, to hold fast to that which still has value and meaning.

There are those who create, who look ahead, as they seek to build a new model of meeting needs and fulfilling responsibilities for the new age that is dawning.

There are those whose role is to destroy, to be the very breakers of the old idols and icons, and though they are often seen as purely negative and without a sense of responsibility or honor, they also serve to bring about the new age.

Moreover, (and I will comment more about this in the forecast for the United States), I noted last year that this passage of Saturn through Capricorn has historically been a rather challenging time for the USA. That is principally because as Saturn moves through early to mid-Capricorn degrees, it forms an Opposition to the Venus, Jupiter and Sun in the United States’ chart.

In previous Saturn passages, (1988–91, 1959–1962 and 1929–32), the USA experienced strong if not severe social, economic and business challenges. These disruptions were followed by cultural upheavals and political upsets. We can now see that although 2018 started with rosy forecasts, the clouds of doubt (and fear) came to shadow the economic landscape as 2018 ended. It will take thoughtful and wise measures to prevent even further upsets and losses in 2019.

Yes, 2019 will be a challenging year, and you may be forgiven for wishing that you lived in a quieter, more harmonious period of history. But you must know, that all who live through such troubled times have wished for this too. But they found a way through and helped to bring about a new age, as you will too.

You are here because it is your sacred duty and honor to create a newer and better world for your loved ones, community, and society. The problems and challenges we face are for the most part self-made; we are the Creators and we made the world that is.

The great and good news that we should take from this is that we also have the very Intelligence, Love and Will to make a better world too. It is really a choice you must make, each and every day, to stay true to the path of Light and Love. And remember this is often made so through the smallest acts of kindliness and consideration, and by this you will help one another to turn back the shadowing clouds of doubt and fear and build a better tomorrow.

Whenever you find your mind is troubled or fear is growing within you, remember the ancient Invocation that can help you hold to the path of Light, Love and Will:

From the point of light within the Mind of God
Let Light stream forth into our minds
Let LIGHT descend on Earth.
From the point of love within the Heart of God
Let Love stream forth into our hearts
May LOVE increase on Earth.
From the center where the Will of God is known
Let purpose guide our wills
The PURPOSE which the masters know and serve.
From the center which we call Humanity
Let the Plan of Love and Light work out
And may it seal the door
where evil dwells.
Let Light and Love and Power restore the Plan on Earth.

Next, “Whither are we going?”